Until today, every stablecoin has to balance three main goals. The main target and main purpose of a stablecoin is to hold a stable value pegged to the value of another asset such as a Fiat currency. This price stability can be achieved through different price-stability mechanisms. Often, the issuer of the stablecoin asks for collateral that could be either real fiat currency or digital assets. The lower the achieved volatility of the stablecoin, the better it fulfills its purpose. However, in most stablecoin designs, the goal to achieve high price stability comes with a tradeoff in either the decentralization of the system or its capital efficiency. In the following, we will explain the three dimensions of the stablecoin trilemma and discuss the tradeoffs arising. 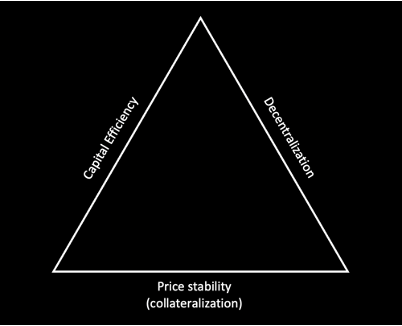 Price stability in par with the pegged assets is the main objective of any stablecoin. This is usually achieved through a colalteralization of the issued stablecoin based on the underlying asset. In the case of an US-pegged stablecoin, a 1:1 USD collateralization could ensure that every stablecoin outstanding is always backed with one USD making a depeg almost inpossible over a longer time period in liquid markets.

Decentralization plays a crucial role in any token and protocol design. Stablecoins have developed into an important and integral part of defi and the wider web3 ecosystem. Thus, decentralization of the governance and the systems of stablecoin issuers help to mitigate centralized single-points-of-failure and risks.

The nature of a trilemma is, that under no condition, all three goals can be achieved to the same extent. Stablecoins, whose focus on decentralization is often not able to create a system, where a sustainable stable price can be achieved without becoming capital-inefficient through the requirement of an over-collateralization of the issued token. Over the last years, many different stablecoin designs have emerged to takle the trilemma. Most could not solve the trilemma but focus on specializing in at least two of the three objectives. However, a stablecoins main goal of holding the price of the pegged asset under any condition remains the most important criterion for any stablecoin project.